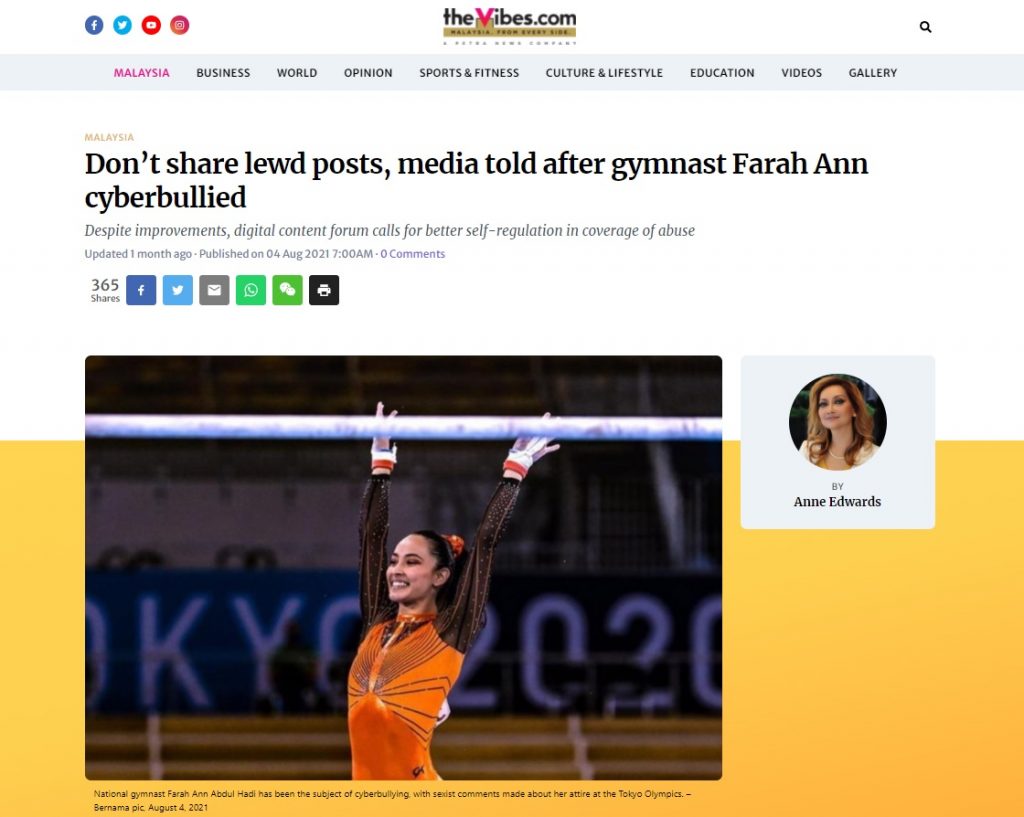 KUALA LUMPUR – The Communications and Multimedia Content Forum (CMCF) of Malaysia took to task those who propagate abusive comments to athletes and other individuals.

CMCF executive director Mediha Mahmood highlighted the recent onslaught against national gymnast Farah Ann Abdul Hadi, who was cyberbullied after sexist comments were made with regard to her attire at the Tokyo Olympics.

“In spite of or maybe due to her achievements, a small, but loud section of the society immediately hones in on her outfit and verbally tears it apart,” she told The Vibes.

“Whether it was based on self-righteousness or self-proclaimed protectiveness, they feel it is their duty and right to throw abuse at her because she wears what she wears.

“They are not so vocal about the outfits worn by male athletes, despite being revealing, too. Do not get me wrong, I do not want them to do that either (cyberbully male athletes).”

Mediha said the media should be responsible and not share lewd comments, as it will only widen the reach of the abusers.

“Do not even share those posts to criticise them as it will only widen their reach. If we feel that they (the posts) are offensive and should not have been shared, then why share them?

“If they are offensive enough to warrant a report, then report them. Speak over them in speaking up for women. They may be loud critics, but all of us can be louder advocates and allies.

“But if you feel that you have to say something against the clothing because it is your moral duty to do so, say it without being abusive, vicious or offensive.”

As a self-regulatory body, it is made up of communications and multimedia industry members, including advertisers, broadcasters, content creators, internet service providers and civic groups.

It is responsible for the preparation and management of a content code and ancillary instruments, as the need may arise to address and govern content-related issues disseminated by way of electronic-networked mediums.

Mediha said, however, self-regulation is not implemented, and the forum is not trying to control anyone or any media regarding freedom of speech and expression.

“Self-regulation under the forum is practised on a voluntarily basis. We are here at your service, and if you join us, you will fall under the self-regulatory framework, where we offer the tools should you want to practise them.

“Self-regulation is designed to promote transparency and ensure accountability, and I believe journalists and media outlets can benefit a lot from coming under the ambit of self-regulation as it preserves the independence of the industry and ensures it is not unduly affected by politics or outside interference.

“In that way, journalists can offer compelling content to consumers, while keeping themselves in check and their rights protected.”

The International Islamic University of Malaysia law degree holder said the great thing about self-regulation – as crafted under the CMA and practised by the forum – is that compliance to the content code is in itself a legal defence.

“The defence for journalists charged under laws limiting freedom of the press like the Sedition Act, Official Secrets Act and Printing and Presses Act is established under Section 98(2) of the CMA.

“Proving that one has complied with the content code is in itself a legal defence to any legal action taken against a journalist or the media, so I think it is very beneficial for the media to fall under the self-regulation framework.”

On the coverage of controversial issues, Mediha said there is improvement in matters of sexual harassment, pointing to the female high school student who went viral on social media for claiming that her teacher made rape jokes during class.

She said although the student, Ain Husniza Saiful Nizam, was heavily criticised for exposing the matter, the media supported her and her pursuit to make schools a safer place.

“This is what we need the media to help us with – develop critical consciousness at the individual level and motivate a collective action to change these environmental and structural arrangements around the portrayal of women in media.”

Other than women matters, the regulatory body has also set its eyes on promoting ethical and positive content standards by introducing a set of guidelines.

This follows a buzz on social media about a pair of “Muslim-friendly” footwear advocated by celebrity Noor Neelofa Mohd Noor.

Mediha said Malaysia is a multicultural society, which makes it “crucial that all content posted for public consumption, especially in the digital sphere, be responsible, tactful and truthful”.

“The increasing use of religion as a marketing ploy has raised many concerns, and the forum had issued an Industry Practice Note on the Use of Religion in Advertising via Broadcast Media in 2017.

“This is also to ensure neither religions nor consumers are exploited via misleading advertising content.” – The Vibes, August 4, 2021