The Reason Why Influencers Should Practice Self-regulation – Content Forum 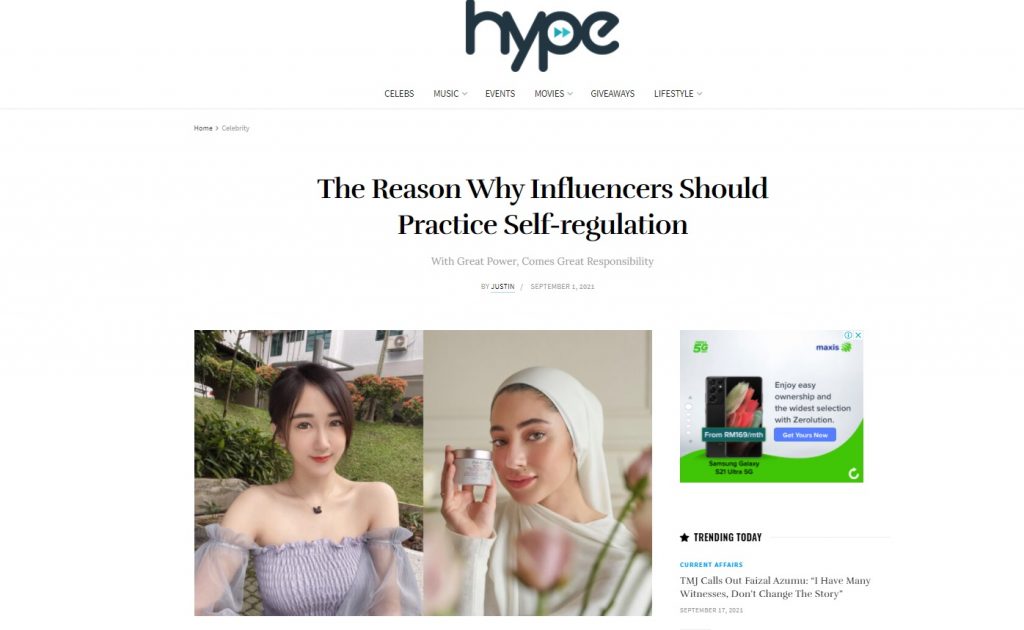 From YouTube veterans to TikTok upstarts, social media influencers are the trendsetters and tastemakers of this generation. It’s easy to see why; unlike celebrities of the past, the influencers of today have a direct connection with their audiences. With their everyday charm and willingness to share intimate details of their personal lives with followers, influencers appeal to us by being authentic – they feel more like our friends and peers rather than distant stars.

This trust from their audiences gives influencers a great deal of power in shaping public opinion. As the cautionary tale of local YouTuber Yang Bao Bei illustrates however, this power can sometimes be abused, and even backfire on influencers themselves. Following her publicised suicide attempt in April, Yang was embroiled in further controversy when several netizens shared that she had scammed them out of thousands of ringgit under the guise of “selling” designer bags.

While Yang has since apologised for her mistakes, some influencers continue to mislead their followers, especially by disguising paid advertisements as personal posts. Since influencers now play a key role in marketing and outreach strategies, this sort of behaviour can adversely impact consumers.

“Influencers can appear to be more genuine and trustworthy than brand advertisements,” says Communications and Multimedia Content Forum of Malaysia (Content Forum) executive director Mediha Mahmood. “When influencers hide the fact that their recommendations are actually paid advertisements, they are taking advantage of the naivety of their followers and the trust given to them.”

More concerning are influencers who promote products and services that are unethical or downright illegal. This is particularly rampant in the health and beauty space, with celebrities hawking questionable cure-alls and too-good-to-be-true skincare products; one local starlet drew public ire in 2019 for suggesting that a banana milk drink she was promoting could regulate users’ insulin levels.

“Advertisers are not allowed to make health claims when advertising food products, but we have seen many examples of influencers doing so,” says Mediha. “Some have claimed that certain energy bars can lower the risk of diabetes, or drinking certain fruit cocktails can cure cancer. This is not only unethical, but also illegal. Yet, many influencers do it and many consumers fall for it.”

For some consumers who fall prey to these claims, the consequences can be dire. In a recent investigative report by Channel News Asia, one Malaysian man shared his experience of using a slimming drink promoted by several local influencers. Due to the dubious ingredients in the product, he started suffering from chronic migraines and was later diagnosed with severe heartburn.
Given the power influencers have in shaping the views and behaviour of their followers, Mediha believes that self-regulation is the best way forward in cultivating a healthy online space for both content creators and consumers.

“Self-regulation allows influencers to continue producing compelling and engaging content without betraying the trust of their followers. By remaining ethical, influencers can also avoid the backlash or “cancellation” that usually happens when irresponsible behaviour is finally outed – one mistake can undo all the good work of the past and annihilate an influencer’s career completely,” she says.

A useful resource for influencers and content creators in this regard is the Malaysian Communications and Multimedia Content Code (Content Code). Drawn up by the Content Forum, the Content Code is a set of guidelines outlining best practices and ethical standards for content in the digital space.
One simple way influencers can start practising self-regulation is by being upfront about paid promotional posts, as these help audiences make informed consumption choices.

Whether it’s sharing a post on their personal experience of using a certain photography service, or creating a video tutorial on how to use a skincare brand’s products, influencers can be a force for good in guiding consumers on the choices they have on the market.

Mediha adds that influencers can also take this Clint Eastwood quote to heart when employing self-regulation: “It takes tremendous discipline to control the influence and the power you have over other people’s lives.”

“Influencers have the power to inspire and impact their audiences, so it’s important that they recognise the need to wield this power responsibly and ethically. By doing so, they’ll be instrumental in creating safe and vibrant digital spaces for all,” she says.