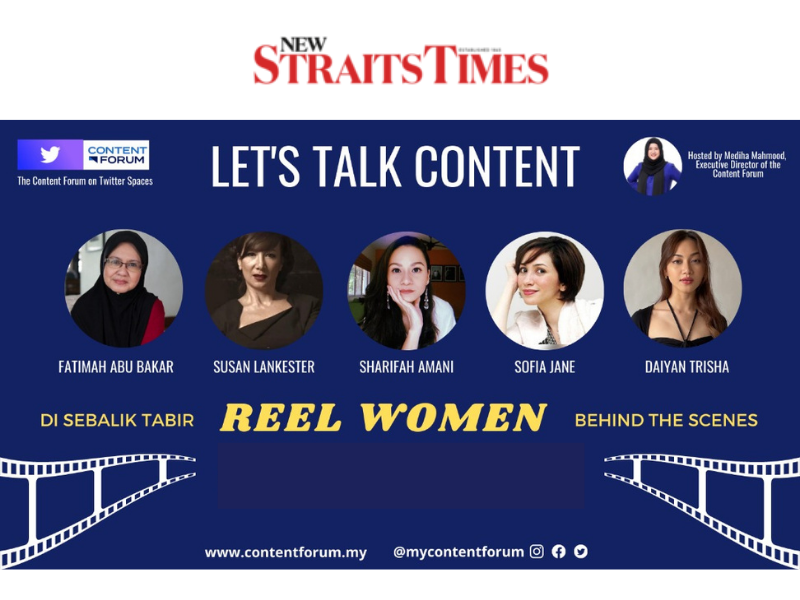 KUALA LUMPUR: In an effort to empower more women in the local entertainment industry to speak up and self-regulate, a recent public dialogue hosted by the Content Forum featured well-known personalities in the TV and film industry sharing their views.

Conducted via Twitter Spaces, the Let’s Talk Content session titled Reel Women Behind The Scenes highlighted the issues of rape scenes in movies, harassment in the industry and cyberbullying on social media.

Amani shared her belief that the stories told on screen were the most important as it ultimately reflected our society, the way we think, our culture and our language.

“We have many strong women doing great things all over the world but our stories don’t often show these Malaysian women and their outstanding achievements,” she said.

“Why can’t we have a scene with a husband and wife showing affection, but rape scenes are okay? When we have stories where women fall in love with their rapists, what are we trying to teach the future generation?” she said.

Echoing her thoughts was Sofia Jane, who said that some men did not even realise the impact rape scenes would be on the community because it had been so normalised.

She urged people to question how each story could impact the audience.

“I’ve seen underaged, unwed mothers in shelter homes who were raped. How will watching an interview with men normalising rape scenes impact them emotionally and mentally?” she said.

Sofia added that she herself had experienced the distressing impact when a rape scene she acted in years ago was later spotlighted and trivialised as a joke.

“The screenplays are no longer exploring emotions but exploiting them,” she said.

Meanwhile, Daiyan Trisha shared her views on harassment and believed that any form of it, either online or offline, was humiliating and should be stopped.

“I have had my fair share of sexual harassment on-set and had my photos misused on several websites. I’ve spoken up about it time and again but to no avail.

“Ultimately, I just felt like I needed to get used to it, which is just pathetic but I didn’t know what else to do,” she said.

Daiyan added that since there was more awareness about these issues and a code of conduct for the industry to self-regulate now, she hoped things would change for the better.

While Fatimah Abu Bakar believes there has been some change with people speaking out against sexism, she observed that they were fighting against a deep-set wall of bad attitudes.

“It’s a long journey but if we believe that we are going to leave the arts as something that the younger generation would want to continue, we cannot give up.

“My advice for all is to continue calling these people out. Don’t tolerate this whole ‘boys will be boys’ mentality.

“If people think that such behaviour is common and was normalised before, we make it clear that it is not anymore,” she said.

Meanwhile, Susan Lankester said that there were some women who became enablers to this bad culture in the film industry but added that she was seeing a definite change.

“Many actresses are now holding key positions and with this energy that’s started up now, I think the stories are getting better,” she said.

“We should use social media to our advantage and focus on content that portrays women in a positive way. Girls and women should be empowered to tell their own stories and encourage their followers to do the same,” she added.

One of the ways to encourage better content is through self-regulation, where consumers are empowered to speak up for what is right and help the industry to grow.

Drawn up by the Content Forum in 2004, the Content Code is a set of guidelines outlining best practices and ethical standards for content creation and consumption across all digital media platforms.

“Self-regulation involves every single one of us in the content ecosystem. When offensive content is shown on television, people do call it out on social media but we highly encourage them to also lodge a report to the Content Forum.

“We are empowered to investigate and enforce the Content Code on those who have breached it,” Mediha said.

“The content industry plays a huge role in advancing societal change, to push for reforms and calls for action.

“We will continue to have these important dialogues and involve all the stakeholders who can help to affect real change,” she added.

It is designated by the Communications and Multimedia Act 1998 (CMA’98) to oversee and promote self-regulation of content over the electronic networked medium.

Aimed at facilitating self-regulation, which provides an additional layer of consumer protection that complements the legal framework, the organisation is committed to govern and promote the creation, distribution and consumption of electronic-networked content.

The Content Forum is currently in the midst of conducting a nationwide public consultation exercise, aimed at gathering feedback from members of the public on proposed revisions to the Content Code, including a provision to address online abuse and gender-based violence.

Members of the public are encouraged to provide feedback on this public consultation to ensure that Content Code version 2021 takes into account consumers current needs and concerns.

Further information on this exercise can be accessed at www.contentforum.my.